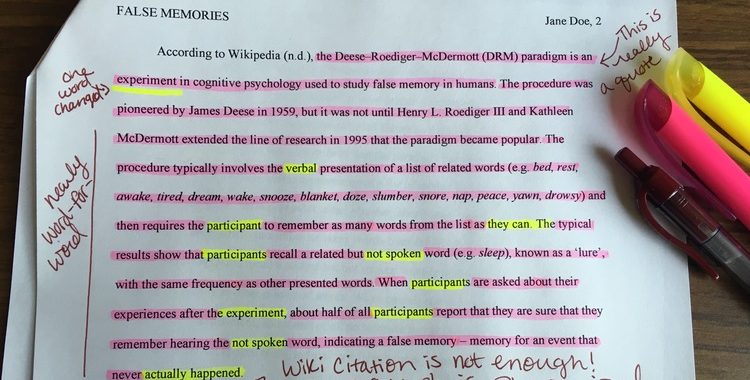 Plagiarism Is A Strict No-no

In today’s world, everyday some new inventions are made and there is an unlimited number of options for information available to humans, so it has become a very difficult job to track plagiarism and even e-cheating.

In terms of a definition, plagiarism means the usage of information by a person that originally belongs to another person, and without acknowledging that the information being used belongs to that other person. But when a person refers to someone else’s work and mentions the original writer’s name, it is called citing of text, and not plagiarism. Citing of text is very much appreciated.

In colleges mainly, plagiarism is becoming more common these days in cases of project submission by students (source). This makes the degrees offered by colleges and universities being questions with regards to their authenticity. Of late, the controlling authorities have decided to impose a penalty on students if their work is found to be copied from some other source.

To combat the plagiarism which is only growing among students, many college and even school authorities have decided to use a software and other methods that can detect words that have been used with amazing frequency. Also, the authorities may check the work submitted with that of the seniors’ to ensure that the matter is not just being blindly copied from students who had submitted the work during their term.

Also, another step that has been taken to avoid any sort of plagiarism among students is to make them sign agreements in which they acknowledge that all the material submitted therein is their own and any reference is duly quoted as such. This is what an assignment is meant for – to make the students learn and understand whatever knowledge is being imparted to them. Plagiarism, if not detected, may help them secure marks but not knowledge.

The main point to drive home here is that whatever work is submitted by a student must be entirely in his own words and any references or articles whose help has been taken must be duly acknowledged by the student. If a student puts his or her own efforts in producing a given piece of work, combating plagiarism will undoubtedly be a much easier task to perform. In fact, all those students who prefer to take credit of others’ worker “white-collar criminals” and they deprive a chance to fellow fair students who put in their own effort in doing the given work.

Thus to conclude, plagiarism has become very difficult to be tackle mainly due to the presence of the Internet from where information can be easily accessed from anywhere in the world. Plagiarists who claim others’ work as their own may succeed initially, but in the long run, they will only face problems, and there is simply no doubt about this. Even otherwise, if good software to combat plagiarism is used, the plagiarists can be brought under the scanner for their unethical actions.